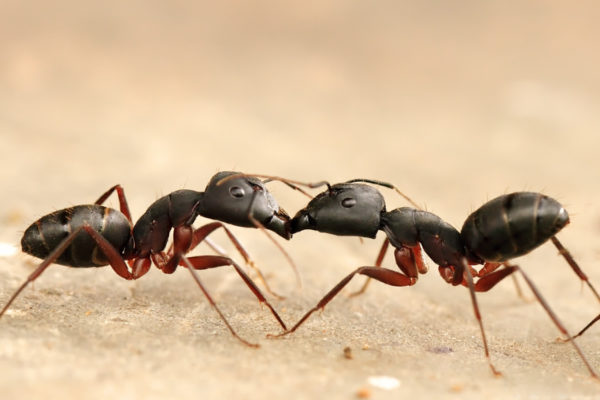 There are three types of ants in Western Australia and they are categorised by what they feed on. They are Sugar feeding, Fat and Oil feeding and Protein feeding.
The most common ants that cause problems in homes in Perth are the Sugar feeding and Fat and oil feeding ants.

It is important to identify the type of ant, so we know how best to treat it.

The most common sugar feeding ants in Western Australia are White-footed house ants (Thechnomyrmex albipes) and Black house ants (Ochetellus glaber). These two species look and act very similarly. They both tend to nest inside the house in the cavity wall, roof space and behind cupboards, however the white-footed house ant also nests outside in trees and pot plants. They both are most commonly found around kitchens, bathrooms and laundries seeking water and looking to eat sweet substances.

The big difference between the two is that the White-footed house ant has a very complex nest structure with multiple queens, which makes it a lot harder to eradicate. Also with such a complex colony structure and the fact that a proportion of the colony are not involved in trophallaxis (transferring of liquid food) with other members of the colony, this creates a big challenge in eradicating the infestation completely.

Conversely, the Black house ant has only one queen and a relatively small colony size in comparison. They engage in trophallaxis so getting a bait treatment to eradicate the colony is much easier.

The two most common types of this sort of ant in Perth are the coastal brown (Pheidole megacephala) and Green-Headed ants (Rhytidoponera metallica). Although these two species feed primarily on the same things, they are completely different in nature.

The Green-Headed ant, also known as the metallic pony ant, is relatively new to Perth. It typically nests outside in small colonies under paths, rockeries, garden beds and in grassed areas. It forms very untidy mounds. This species is not trail forming, so nest locations can sometimes be difficult to locate. It very rarely enters houses, however poses a massive problem outside in gardens, parks and playgrounds because it possesses a very painful sting that can feel like your skin is on fire for up to an hour after being stung.

Coastal Brown ants are one of the easiest species of ant to identify as it is one of the few ant species that has both major and minor workers. This meaning that the major worker has a much bigger head than the minor workers so it is very distinctive. It is considered one of the most major ant pests throughout Perth metro, Darwin and also along the eastern seaboard.

The major worker performs tasks like protecting the colony as well as easy tasks like cracking open seeds.  These ants infest houses, stores and gardens, taking food ranging from sugar to cheese, meat and breads, and also looking for water in the dryer conditions.

This species tends to live in garden areas and under pathways. Most commonly you will find them nesting around the base of plants or in the garden bed itself as well as in grassed areas. This ant forms very large colonies and will aggressively defend its territory against other ants species and insects.

The two most common species of this type of ant in Perth are the Odorous garden ant (Iridomyrmex spp) and Bulldog ant (Myrmecia spp).

Odorous garden ants are a very easy species to identify as they get their name from the smell they omit when you squash them. As the name suggests, they live in garden areas. They feed on insects and scavenge for moisture. These ants have multiple queens and multiple nests, and are commonly seen moving eggs and immatures between nests.

Bulldog ants or bull ants are again easy to recognise due to their size and the head and jaw structure. They inhabit pretty much all of Australia from rainforests to coastal pains, to desert. There are many different species of bull ants but all have the same common characteristics; they possess a very painful and venomous sting that many people react strongly to, and some even have an anaphylactic reaction (more frequently reported than shark attacks).

These ants create nests that are big mounds which look similar to a volcano. They are a very aggressive species when they feel threatened and don’t hesitate to use their sting.

Call Us Today - Get Your Free Quote!

Give us a call today to discuss your specific pest treatment and control needs. We aim to give the best service in town. Get your free quote today!